Tesla’s share price recently sold off sharply, after quarterly results showed the company underperforming relative to investor expectations. The main concern investors had was the company’s $408m loss in Q2, which was much larger than investors anticipated. This equates to losing $4.5m a day, a hefty bill for investors to handle while Tesla pursues its dreams of dominating the electric car market. Elon Musk has overpromised and underdelivered a number of times in the past, and has consistently failed to bring Tesla to profitability, which increases negative sentiment in the market towards his company. Tesla bulls keep trusting Musk though, despite the fact that his big dreams are often hard to fulfil. Nevertheless losing $4.5m/ day after the CEO said the company would be profitable in “all quarters going forward” is a tough ask. 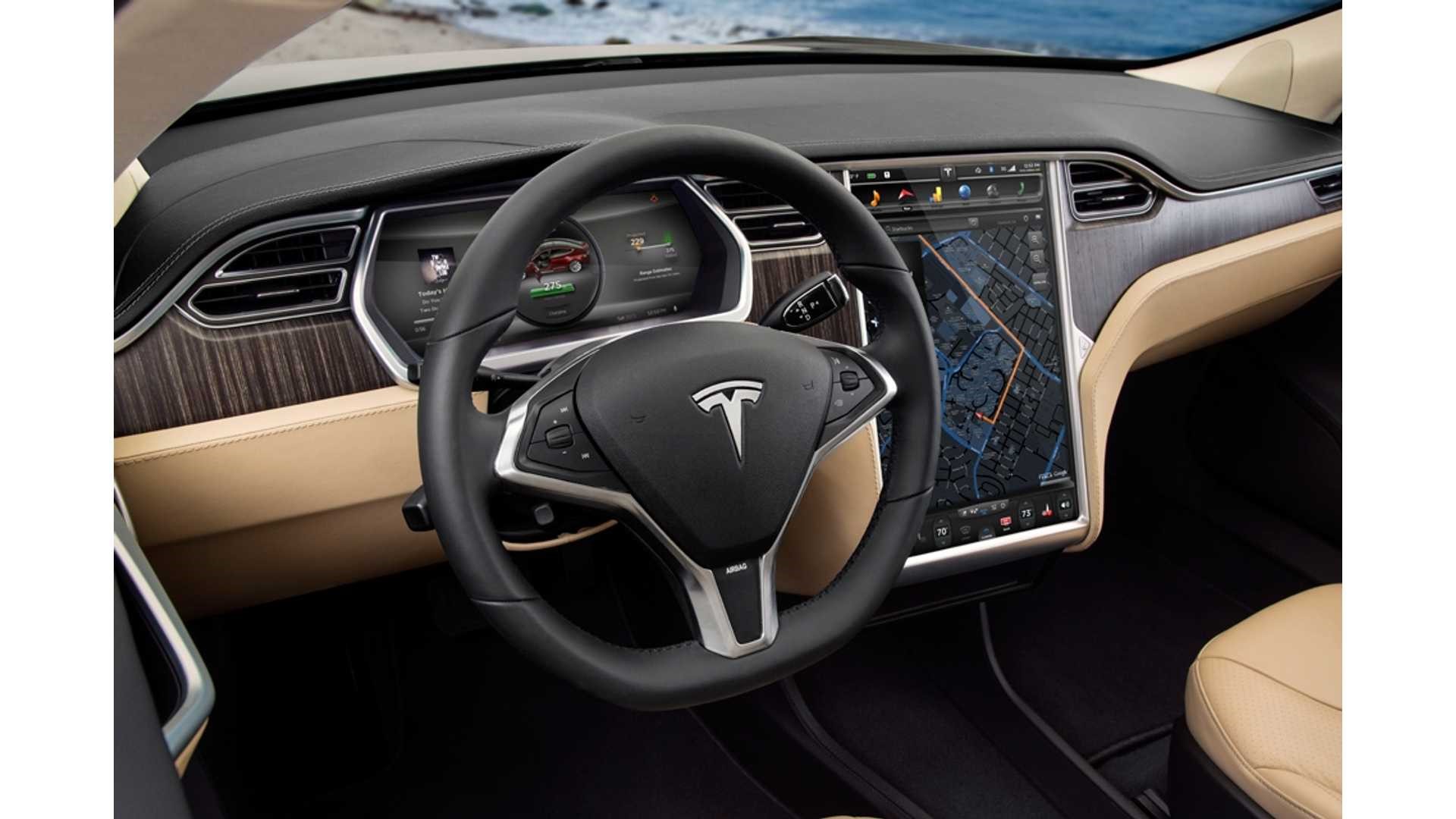 Tesla has been selling off on the back of weak results and a stretched multiple (Credit: Inside EVs)

Another issue coming out of the results is a steady reduction in gross margins within the business. This means that the losses aren’t driven by increased spending on things like sales and R&D which grow the business, it is because each unit is less profitable. This is a major problem for investors, because a big reason for investing in the company is to gain access to the research and development of its billionaire CEO, Elon Musk. Even Tesla bears would mostly agree that Elon Musk is an innovative genius, but investors will be worried about the fact that their R&D budget is less than a fifth that of GM. This puts Tesla at a major disadvantage, and it now lags a number of key competitors in autonomous driving capabilities.

How expensive Tesla is compared to other car companies

All these issues would be less of a problem if it wasn’t for the stretched valuation in Tesla. The company trades at much higher multiples than peers, with a market cap per car of nearly $500k. This makes Tesla a hundred times more expensive than other competitors like GM, who are ahead in developing autonomous driving technology. There is also the chance Tesla will miss delivery numbers this year, which would indicate that the company is struggling to grow.

When making an investment decision, it is important to see whether the product or service that you are investing in is worth buying. Walking into a Myer store that had not been updated in ten years and seeing how few people use it, could have helped avoid losses stemming from a business that destroyed 90% of its market value post-IPO.

Tesla cars are highly rated by car enthusiasts, partially because their electric engines are much more responsive and smoother than standard petrol engines. Their cars start at $36,600, but a small $10k performance upgrade can allow the car to accelerate from 0-100km/h in 3.3 seconds. This puts the car ahead of the 2016 Aston Martin Vantage GT12, 2017 Ferrari California T HS and 2017 Lamborghini Huracán LP 580-2 Spyder, all of which sell for several hundreds of thousands of dollars. The car also beats some slightly older Bugatti models, which is an incredible result since Bugatti sells its cars for several million dollars and focusses on building the fastest machine in the market. 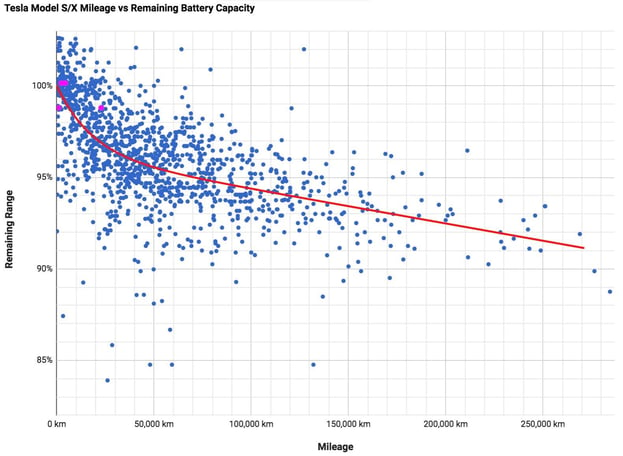 Another benefit of Tesla is the long battery life. One recent test on seven-year-old Tesla showed that its battery was operating at 98% of capacity. Even after 250,000 kms, the battery is still operating at over 90% capacity according to independent tests. Most smartphone owners would love if their battery was operating at 90% after a year of use, let alone 98% after seven years. These statistics shows that Elon Musk’s rhetoric around the benefits of Tesla’s products appear, in this instance, to be true.

While Tesla’s valuation is stretched, the underlying product is certainly strong. A strong product and successful sales execution are a huge part of growing a business and adding value to shareholders.

While the strengths of the product are apparent, the company is struggling to raise capital and is having a difficult road to profitability. One reason why the product is appealing to consumers is that they are comparing Teslas to cars with those produced by other profitable companies. By throwing $4.5m a day at Tesla, investors are allowing them to sell cars at much cheaper prices, which should be considered when comparing products to competitors. In assessing how Tesla could perform as a business, one needs to compare their cars with cars in higher price brackets to assess how competitive their product offering will be. This is because there is no point buying a company which could never be competitive if it needed to produce goods profitably, since the ultimate benefit of owning a business is profits, either now or in the future.

If you don’t like Tesla however, there are a number of other companies in the market which are working on new technologies which will shape our future. WAAAX stocks, a group that includes, WiseTech (ASX: WTC), Altium (ASX: ALU), Appen (ASX: APX), Afterpay (ASX: APT) and Xero (ASX: XRO), have gained the attention of investors after their share prices rallied several hundred percent over a few years. Nevertheless, while Australia punches above its weight in innovation, most opportunities are offshore.

America is a particularly good option for investing in disruptive technologies, partially due to the country’s size. This means that companies can rapidly scale in the one regulatory environment, after which they have the critical mass to embark on global expansion plans and dominate world markets. This is the story behind most of the FAANG stocks and is the reason why you need to invest internationally to gain maximum exposure to accelerated disruption.

Typical issues which Aussie investors have with investing offshore include a more limited knowledge of companies outside, sky high brokerage costs at the major brokers and not knowing where to start. We side-step these issues through developing a platform called Macrovue, where a top performing fund manager identifies attractive international investment opportunities for us to look at. We pay $15 a trade for brokerage and have a clear direction on which economic trends we are investing in. As one of the only platforms offering managed portfolios without performance fees, it’s worth looking at a couple of the themes we are looking at. 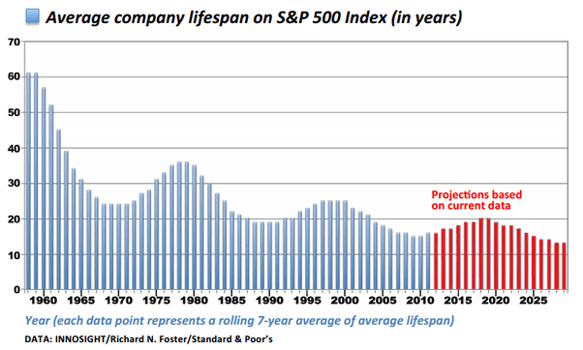 The average lifespan of a company is declining (Source: Innosight)

With the average company staying in the S&P500 for less than 15 years, as compared with 60 years a few decades ago, not reviewing positions in previously untouchable blue-chip stocks is becoming risky business. The pace of technological growth is accelerating, and the leaders of tomorrow will be the companies best able to capitalise on this trend. Some of our businesses include: