Is The RBA Going To Take Aussie Interest Rates Down To 0%?

Quantitative Easing typically involves purchasing longer-term government bonds, taking supply away from the bond market and driving bond prices up. Bond prices move inversely to interest rates, enabling quantitative easing to drive down long-term interest rates. This leaves yield-hungry investors with nowhere to hide, forcing them to go into riskier assets. More aggressive types of quantitative easing involve purchases of corporate bonds as well as government bonds. This means that even if investors are happy to take the risks associated with corporate debt and a potential company bankruptcy for years, they will still be stuck with ultra-low interest rates.

The GFC was a game-changer for Aussie savers, and not in a good way. Rates hit a then intergenerational low of 3%, and, after a brief rebound, only headed downwards from there. The RBA sees more downside than upside at present, so if anything changes, interest rates are more likely to fall than rising from here on. 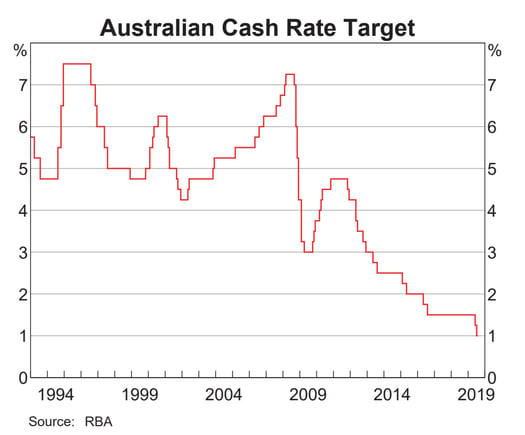 Figure 1: Aussie interest rates for the past 20 years (Credit: RBA)

To make matters worse, the sub-1% interest rate doesn’t even offset our 1.6% inflation rate, meaning the real value of your wealth declines by 0.85% even if you don’t spend a cent of your savings. Even if you spend every cent of the returns on your low-interest savings account, it still takes over $10m in the bank just to match Sydney’s average household income off bank interest. With most analysts also believing that property will take a long time to recover and rental yields sit at record lows, equities are the only game in town.

Prior interest rate cuts from the RBA were designed to insulate the country from slowing economic growth and address fears around the property market. The RBA became increasingly concerned around the sustainability of the property market when prices in Sydney and Melbourne were falling fast, and weak inflation meant there was nothing in the way of interest rate cuts.

Some economists regard an interest rate of 1% in Australia as similar to 0% in other parts of the world, given unique attributes of the Australian economy and our financial centre’s reliance on offshore funding. After the RBA cut rates to 1%, they only made a further rate cut because of ongoing weakness in the international economy.

By cutting interest rates this low, the RBA is trying their absolute best to get people out of cash, term deposits and bonds and invest in risk assets like shares and real estate. They also want to encourage people to spend more of their money, which would stimulate the economy and reduce the impact of a downturn.

Isn’t This a Bad Idea in a Recession?

Since stocks generally fall in a recession, what the RBA is trying to force us to do doesn’t seem great on an individual level. If the RBA cuts interest rates before a recession and you switch your money into equities, you may lose money.

Even world-class investors have consistently given false alarm bells this cycle (Credit: MarketWatch)

The thing to realise however is that not all equities are created equal. More defensive stocks with stable cash flows have not corrected far in recessions and are much safer places to park cash than the broader market. Some stocks, such as gold miners, rise when the stock market goes down. This is because people look for safe havens during periods of market turbulence, driving the price of gold up and increasing the earnings of companies producing the commodity.

Since equity markets are at all-time highs, many investors believe that the stock market as a whole is risky. The important thing to realise however is that a recession could potentially be years off, and there is always a reason to suspect that one may be on the horizon. Investing in equities has historically produced the highest returns of every major asset class, including property, so it may be unwise to avoid the asset class entirely because of recession risk.

When will rates rise?

To illustrate this example, lenders will typically lend up to 6 times someone’s income for a home loan. If mortgage rates were to rise to even 6%, implying a cash rate around 4%, all new home buyers who maximised their borrowing capacity would be paying 36% of their income on interest alone for their home loans. Most economists would consider such a high-interest bill indicative of severe mortgage stress, and it would hurt spending in the economy so much that it is highly unlikely the RBA will embark on this path. 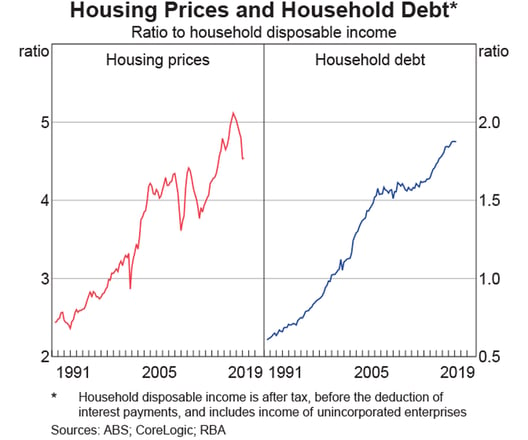 What is the lowest they can go to?

This makes negative rates a real possibility if there was a recession today. It would be almost unprecedented for a central bank not to cut interest rates by more than 0.75% in a recession where inflation was running below the central bank’s target range. This would mean that you would not only not get interested at all on bank deposits, but you would also be billed for keeping cash there. 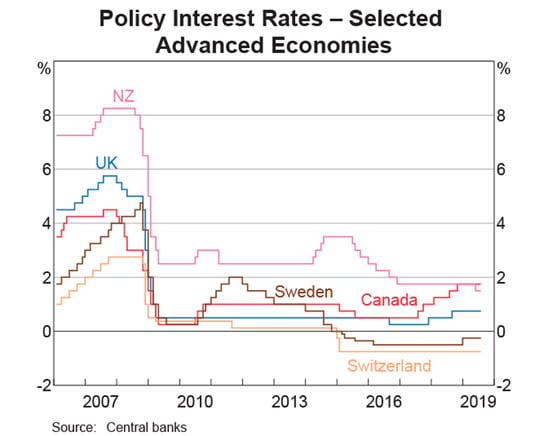 Phillip Lowe said that is “possible” for the RBA to be forced to cut interest rates to 0% if there is a serious downturn. He said he “hoped” to avoid negative interest rates, but coming from the RBA Governor, that is a far cry from ruling it out. If a moderate to a severe recession was on the cards for Australia, negative rates are more likely than most people realise.

Should I Shoot for Dividends?

Talk of low-interest rates drives up interest in dividend stocks, a great investment alternative for investors seeking an income. In this game, however, it is important to seek out companies with a quality yield, not just stocks that pay out a high dividend yield for now.

Quality yield is about finding a stock that is unlikely to cut its dividend and can slowly increase its dividend yield over time through steady earnings growth. The payout ratio is a good proxy for a dividend cut; if a business is paying out more than 80% of profits, like Westpac (ASX: WBC) and CommBank (ASX: CBA), it often has a higher than average chance of needing to cut its dividend to get some cash to reinvest. Cyclical sectors such as banking and mining are also susceptible since their earnings can swing more than normal in a downturn.

If you are a bit more selective, there are numerous US companies that have not missed a dividend payment in a hundred years, have sustainable payout ratios and quality management. Given this includes two world wars, the Great Depression and the GFC, it is quite an accomplishment.

Our international high dividend Vue, a selected list of international stocks which attracts no performance fees, pays an 8-9% dividend yield. For investors who also want to not tie all their assets to the health of the Aussie economy, an 8-9% dividend yield beats 0.75% in local banks. This is one of the many options that investors have if they want to boost their income and get out of the trap of declining interest rates that has defined term deposits over the past few years.

Which Industries to Invest in

As monetary policy is inseparable from our position in the economic cycle, it is vital for us to consider both in order to determine where to invest. Interest rate cuts in a boom time such as ours will boost high growth companies whose cash flows a long time in the future suddenly become more valuable. In a recession however, when market confidence is far more subdued, most capital flows into defensive industries.