Overview of the Australian economy, interest rates and the banking sector

The Australian economy has been growing on average below-trend growth over the past decade. In particular, annual growth was reported at 1.4 per cent per to the June Quarter 2019, while trend growth is around 3.1 per cent per annum. In light of the below-average level of economic growth and given the inflation rate has been very subdued, the Reserve Bank of Australia (RBA) has over time been undertaking an expansionary monetary policy, with the cash rate steadily decreasing since 5 October 2011 from 4.75 per cent to the current level of 0.75 per cent (see Figure 1). 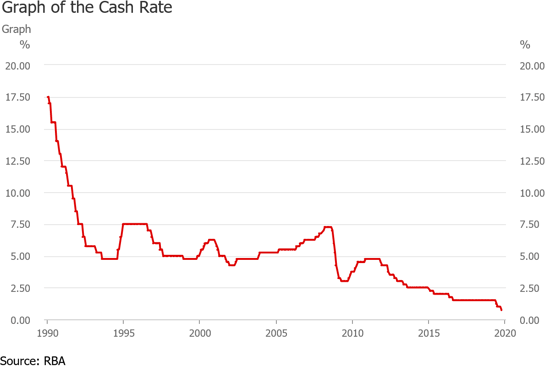 Over the last decade, profits of the major banks have been stagnated. In addition to modest growth in the Australian economy, there are two other factors that have caused this stagnation in profitability. Firstly, credit growth in the housing, business and personal sectors has been relatively low and falling since around 2015 (see Figure 2). The most recent figures released by the RBA on the 2 October 2019 show that credit growth is continuing to slow following the trend. 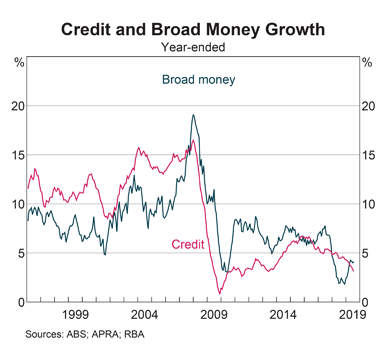 Secondly, the net interest margin for the major banks has fallen from around 2010 to current levels (see Figure 3). The main driver for this occurring is that as interest rates have been steadily decreasing, this has caused net interest margin to squeeze as the banks lower lending rates while deposit rates and the cost of other funding has not fallen by as much. It also reflects competitive pressures in the industry. 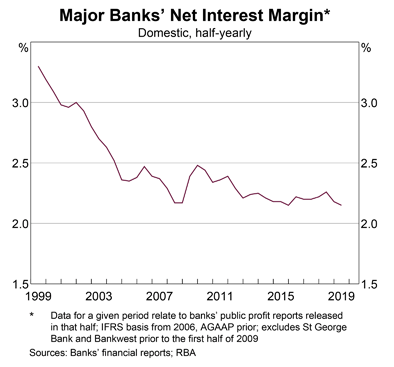 Recent reductions in the RBA’s cash rate cut and are the banks passing it?

It was announced yesterday (2 October 2019) that the major banks will not pass the full 25 basis point rate cut from the most recent rate cut on the (1 October 2019). The major banks announced that they will lower their variable housing rate by between 0.13 and 0.15 percentage points. That is, none of the major banks passed on the reduction in the cash rate in full, possibly reflecting a preference limit the negative impact on the net interest margin.

What are the recent regulatory developments impacting on the Australian banking sector?

The first recent key development is that the Australian Prudential Regulation Authority (APRA) has eased regulation requirements on lending. On 5 June 2019, APRA announced that banks have to test a borrower’s ability to repay a loan at 2.5 percentage points above the standard variable rate instead of at 7.25 per cent made in 2014. This is positive news for the major banks, as it should allow them to provide additional credit for the housing sector.

The above two developments are positive for the industry. However, the banks continue to face issues arising out of the Hayne royal commission into financial services. Yesterday NAB announced additional customer remediation costs (around $832 million after-tax) and the other banks may announce further costs in coming months. In addition, ASIC is an appealing decision against them relating Westpac’s lending practices and the responsible lending requirements. Further, ASIC is undertaking a consultation process on the regulatory requirements around responsible lending. The outcome of this consultation process is uncertain, but it could result in additional regulatory requirements.

Australia’s banking sector is on a double-edged sword. On one edge, availability of credit to consumers and businesses should increase due to low-interest rates and an easing in lending regulations and capital requirements. However, on the other edge, the net interest margins for each bank could be squeezed even more.