Carnarvon Petroleum Ltd (ASX: CVN) is an oil and gas exploration company with projects located offshore off the north-west coast of Western Australia and in the Timor Sea. Carnarvon has a market capitalisation of A$305 million.

Carnarvon main project is a 20% interest is the Dorado/Roc project (located 160 kms north of Port Hedland (Santos Ltd (ASX: STO) has an 80% interest). 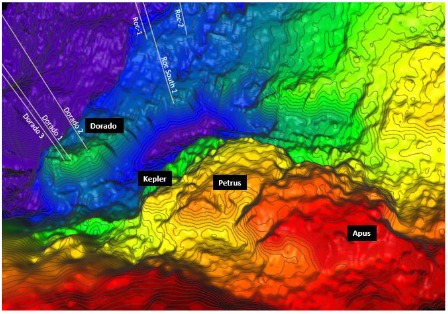 What has Carnarvon announced today?

Carnarvon announced an update on the company’s Apus, Petrus and Kepler prospects (which are located near the Dorado prospect).

Interestingly, this prospect resides in shallow water at a depth of around 75 metres and has a shallow depth to the top of the reservoir of less than 2,500 metres. This discovery could support a standalone development project in the future, or a tieback to the Dorado development is also considered possible.

Like the Apus Prospect, this prospect lies in a water depth of approximately 85 metres, meaning drilling can also be achieved using a lower-cost jack-up type drilling rig. In addition, Kepler and Petrus are only 14 and 18 km respectively to the east of the proposed location of the Dorado field. This short distance allows these prospects to be tied-back to the Dorado development. This would reduce the operational cost of extracting oil and gas reserves in these areas.

On 8 October 2019, Carnarvon and Santos (ASX: STO) announced the results of the Caley flow test for Dorado-3. The test was very successful. It was reported that the Caley reservoir flow test exceeded 11,000 barrels of oil per day plus associated gas. Carnarvon notes that the potential flow rate is even higher, but the flow rate was limited by the capacity of the test equipment on the rig. This is a significant oil discovery. The test indicates very high potential flow rates of around 30,000 barrels per day from each production well in the Caley reservoir.

Dorado development concept is now well advanced. The initial phase involves of oil and condensate production with gas reinjection to support the oil recovery. Production facilities are being designed for production of 75,000 to 100,000 barrels per day. Front end Engineering Design work will fully define the scope and plan for the project so that a Final Investment Decision (FID) can be made by the Joint Venture in 2021, subject to business conditions.

This news announced today is positive for Carnarvon’s long-term prospects (in addition to the Dorado project). The Apus, Petrus and Kepler prospect can all be tied-back to the Dorado operation, reducing the cost of extraction at these sites. In addition, the most positive news is from the Apus prospect is that there is likely a higher ratio of liquids compared with the Dorado project, opening another strong prospect for the company to exploited in the future.

The market reaction to Carnarvon’s is positive, Carnarvon share price is up around 5% and is currently trading at A$0.2075.