Why Some Fund Managers Are Weary Of Low-Interest Rates?

Investors Mutual CEO, Anton Tagliaferro, is the latest fund manager to warn the RBA about the impact which records low-interest rates have on the Australian economy. While most hawkish analysts criticise the Reserve Bank for leaving little room to cut interest rates in the event of a recession, Tagliaferro believes that low-interest rates are responsible for making the economy less efficient and halting productivity growth. 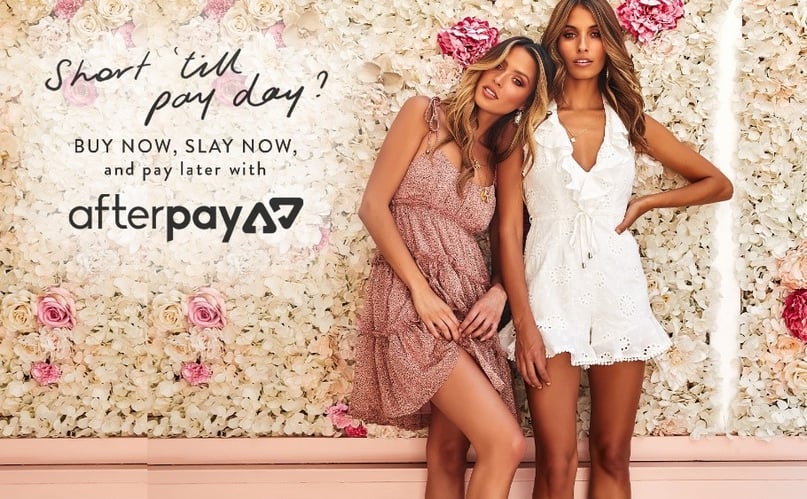 Companies like Afterpay have rallied strongly on the back of record low-interest rates since it reduces their cost of capital and boosts its net interest margin (Credit: APT)

If a business makes a 5% return on equity in a high-interest rate environment, they will most likely lose the backing of investors and see their share price tumble. This will continue until a point where the company sells at a heavy discount to intrinsic value, which attracts takeover bids and encourages shareholder activism. Activist investors, a famous example being Carl Icahn, typically take ownership interests in companies with the intention of influencing how the company is run and realising a share price gain after the company pivots towards a more successful strategy.

These market forces usually combine to result in inefficient companies that fail to generate a reasonable return on equity and have no plan to change that ceasing to exist. In a high-interest rate environment, it makes no sense to accept a lower return from a business than what you could get on interest from the bank. Only the best businesses survive and create jobs, which means that people work more productively.

In an ultra-low interest rate environment, income-seeking investors are forced into the stock market if they want to keep their lifestyle while preserving capital. While a 5% return on equity in the previous example looks unattractive when interest rates are 7%, it could look attractive if interest rates are 0%, depending on the circumstances. This allows low-quality businesses with no competitive advantage to operate on razor-thin margins and maintain market share, reducing the business imperative to improve productivity.

To make matters worse, businesses that generate high returns on equity and have a strong product now have to compete with businesses that are inefficient, barely break even and can still maintain market share. Successful businesses are forced to cut costs, lay off staff and cut back on growth ambitions, making the economy less efficient. This is a direct distortion of creative destruction, a fundamental principle of capitalism by which poor businesses fail and are replaced by more productive ones.

Another effect of low-interest rates is a misallocation of capital towards rapidly growing businesses, concentrated in tech, that will take several years to mature. If interest rates are very low, whether earnings are projected to come through now or in ten years’ time matters a lot less than it once did. The WAAAX stocks, a group that includes Wisetech (ASX: WTC), Altium (ASX: ALT), Appen (ASX: APX), Afterpay (ASX: APT) and Xero (ASX: XRO) are key beneficiaries of the trend. Tagliaferro, a value investor whose relative performance has been hurt by a surge in high flying growth stocks, would argue that the allocation of billions of dollars to businesses with new, unproven models may be costly for the economy. Most growth investors, however, would cite the productivity and returns on equity of some of those businesses, arguing that they will increase economic growth over the long term.

Quantitative Easing typically involves purchasing longer-term government bonds, taking supply away from the bond market and driving bond prices up. Bond prices move inversely to interest rates, enabling quantitative easing to drive down long-term interest rates. This leaves yield-hungry investors with nowhere to hide, forcing them to go into riskier assets. More aggressive types of quantitative easing involve purchases of corporate bonds as well as government bonds. This means that even if investors are happy to take risks associated with corporate debt and a potential company bankruptcy for years, they will still be stuck with ultra-low interest rates.

The GFC was a game-changer for Aussie savers, and not in a good way. Rates hit a then intergenerational low of 3%, and, after a brief rebound, only headed downwards from there. The RBA sees more downside than upside at present, so if anything changes, interest rates are more likely to fall than rising from here on. 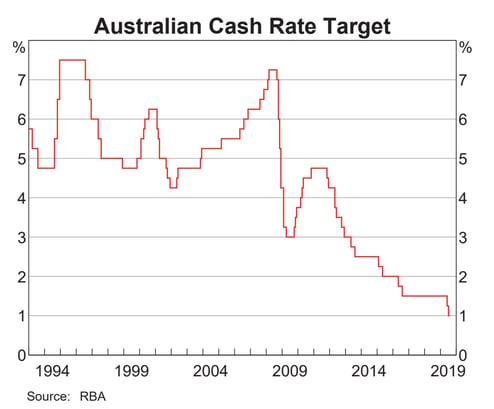 Aussie interest rates for the past 20 years (Credit: RBA)

To make matters worse, the sub-1% interest rate doesn’t even offset our 1.6% inflation rate, meaning the real value of your wealth declines by 0.85% even if you don’t spend a cent of your savings. Even if you spend every cent of the returns on your low-interest savings account, it still takes over $10m in the bank just to match Sydney’s average household income off bank interest. With most analysts also believing that property will take a long time to recover and rental yields sit at record lows, equities are the only game in town.

Prior interest rate cuts from the RBA were designed to insulate the country from slowing economic growth and address fears around the property market. The RBA became increasingly concerned around the sustainability of the property market when prices in Sydney and Melbourne were falling fast, and weak inflation meant there was nothing in the way of interest rate cuts.

Some economists regard an interest rate of 1% in Australia as similar to 0% in other parts of the world, given unique attributes of the Australian economy and our financial centre’s reliance on offshore funding. After the RBA cut rates to 1%, they only made a further rate cut because of ongoing weakness in the international economy.

By cutting interest rates this low, the RBA is trying their absolute best to get people out of cash, term deposits and bonds and invest in risk assets like shares and real estate. They also want to encourage people to spend more of their money, which would stimulate the economy and reduce the impact of a downturn.

What is the lowest they can go to?

This makes negative rates a real possibility if there was a recession today. It would be almost unprecedented for a central bank not to cut interest rates by more than 0.75% in a recession where inflation was running below the central bank’s target range. This would mean that you would not only not get interested at all on bank deposits, but you would also be billed for keeping cash there. 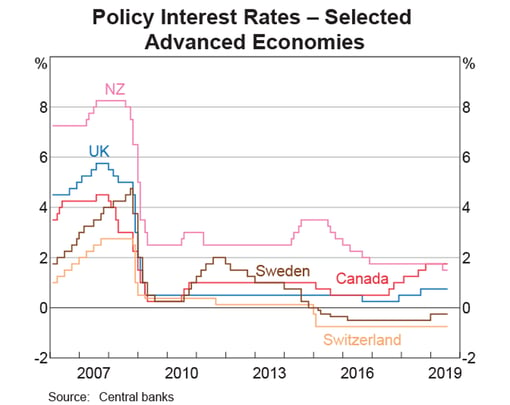 Phillip Lowe said that is “possible” for the RBA to be forced to cut interest rates to 0% if there is a serious downturn. He said he “hoped” to avoid negative interest rates, but coming from the RBA Governor, that is a far cry from ruling it out. If a moderate to a severe recession was on the cards for Australia, negative rates are more likely than most people realise.