Politically controversial share buybacks are at a 6-year high, led by the large miners. Aussie mining companies are not looking to expand their operations, with most of the industry expecting commodity prices to decline relative to today, in the face of an adequate supply demand balance. 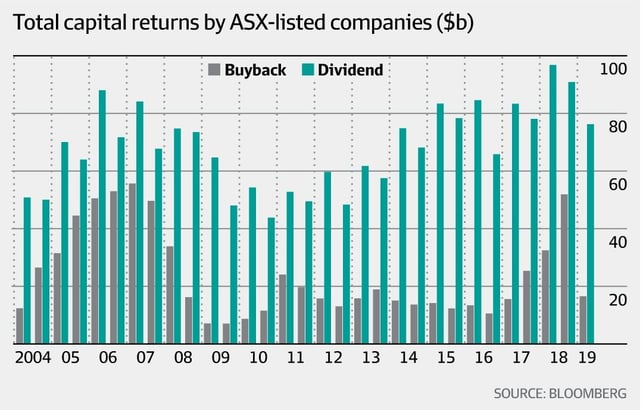 Share buybacks are unpopular in government circles, as politicians who are judged by the state of the economy would generally prefer the cash to be reinvested into businesses. This is particularly true at a time when economic growth is slowing around the world, and the RBA lowered interest rates to all time lows in an effort to bolster the economy.

Most fund managers however view buybacks as an attractive option for companies that have limited opportunities for further investment. The prevailing industry consensus is that there is too much managerial empire building, a process whereby management grows businesses instead of returning capital, despite receiving an inadequate return on capital. Executives may pursue this seeming illogical strategy to advance their careers by being able to showcase experience running a larger company.

Another key factor about the effectiveness of a share buyback is the method by which it is funded. Since interest rates are at record lows, several share buybacks are funded by debt instead of typical sources like corporate profits. Buybacks of this nature are almost invariably guaranteed to be earnings accretive over the short term, which means that earnings per share will rise. Nevertheless, higher levels of debt will make a company more vulnerable in an economic downturn, and it remains to be seen whether buying back shares when equity valuations are at all time highs will prove to be good timing.

Share buybacks can reduce the amount of money available for companies to reinvest in their businesses. The problem for Aussie companies is that the market is in a period of accelerated creative destruction, a mechanism by which the economy as a whole becomes more productive when new, innovative companies replace incumbent laggards. This process increases the importance of innovation in creating a sustainable future for listed companies, helping them to stay relevant in an era where change is the only constant.

Australian companies already have dividend payout ratios almost double their US counterparts. This discrepancy is due in large part to the favourable tax treatment of dividend paying companies in Australia. The double taxation of dividends in the US, while seemingly unfair, is partially offset by lower federal taxes and completely tax-exempt 401k pension plans. Nevertheless, by paying out twice as much in dividends as US companies, ASX 200 managers may risk being left behind by the changes in the US.

One industry where Australian companies have lost out most relative to US ones in the retail space. Poorly managed laggards have performed exceedingly poorly, destroying shareholder value in the process, while offshore companies have entered the Aussie market and prospered.

Myer has maintained a high dividend (until it was suspended – potentially for good), attracting a large pool of investors who seek income at all costs. This was at the expense of in store upgrades, distribution agreements and floor staff. This leaves customers walking into stores that look ten years out of date, unable to find products they find attractive and left searching five minutes for a salesclerk on the off chance they do. While the yield has made the company look attractive for several years, the chronic underinvestment in Myer’s core business made it a terrible investment since listing.

Amazon by contrast has been growing its market share, both in Australia and around the world. Unlike Myer, the company has a strong online presence and is at the cutting edge of automated warehousing and distribution. This helps the company establish a strong competitive moat, setting them up to beat competitors in a typically low margin business environment. While the company pays an insignificant dividend and trades on a sky-high earnings multiple, few investors who bet $100k on the company ten years ago would complain about the $2m+ they have today.

This highlights the way in which an unhealthy emphasis on buybacks and dividends at the expense on long term growth has on investor returns. In sectors like retail, US companies are already trouncing their Aussie competitors on our own turf. To make matters worse, innovative Aussie tech companies like Atlassian are choosing to invest offshore, since local investors are more tolerant of dividend payers in terminal decline than new innovative companies with so many opportunities to reinvest in their business that dividend payouts won’t make sense. In this vein, it is worth considering international investment opportunities for growth potential.

Do International Investment Opportunities Have a Place in my Portfolio?

Being able to access the other 98% of global markets opens entire industries and thematic factors that simply are not for sale on the ASX. One example is 5G Networks, a technology enabling the introduction of autonomous cars and IoT devices. This tech is set to transform the global economy over the next decade. We just don’t have companies at the cutting edge of developing 5G in Australia. Telstra faces more competition with 5G than it did with 4G, which doesn’t bode well for the telco giant, given the completion of its 4G rollout was followed by a multi-year share price slide.

The S&P 500 has quadrupled since the financial crisis, where our own market has barely doubled. This makes a massive difference to the long term returns of investors and occurred while the Australian economy was enjoying a golden 30 years of economic growth. To make matters worse, most Aussie investors invested in BHP, RIO and the big 4 banks. Most of these investors barely moved over the past 10 years, where someone who bet $350k on the US market and did nothing else would have been sitting on over a million dollars in profits. The market has changed, and the wealth building multi-baggers of the future may not be the blue-chip stocks of today.

There are also opportunities to purchase stocks at far more attractive valuations; high dividend stocks internationally often yield over 10% with growing earnings. This is particularly true in Europe, where a decade of stagnation and concerns over EU stability has dented stock market performance. The WAAAX stocks provide Aussie investors with sky high rates of growth, but trade at some of the highest multiples awarded to any growth companies in the world. This is because there are so few growth companies in Australia, that Aussie investors who are unable to invest offshore must pay much higher multiples for growth.

Typical issues which Aussie investors have with investing offshore include a more limited knowledge of companies outside, sky high brokerage costs at the major brokers and not knowing where to start. We side-step these issues through developing a platform called Macrovue, where a top performing fund manager identifies attractive international investment opportunities for us to look at. We pay $15 a trade for brokerage and have a clear direction on which economic trends we are investing in. As one of the only platforms offering managed portfolios without a management fee, it’s worth looking at a couple of the themes we are looking at. The portfolios each have several stocks that investors can pick and choose if they wish: