Is There A Bubble In Passive Investing?

The debate between active and passive investing has resurfaced in recent times, with Michael Burry, the hedge fund manager from the big short, calling it a bubble. In financial parlance, a bubble refers to a situation where an asset is overpriced and is vulnerable to correct suddenly, similar to how a literal bubble will eventually burst in a flash. Burry believes that lazy, passive index tracking, despite producing attractive returns for the past one or two decades, could be at the end of its run.

Passive investment products are usually sold in the form of exchange traded funds, or ETF’s, that track a basket of large companies which trade on a certain exchange. One example locally is the BetaShares ASX 200 ETF, which is tracks the performance of the top 200 stocks on the ASX while only charging a fee of 0.07%. This amounts to a management fee of $700 on a $1m account, compared to a minimum of $20,000 for a hedge fund operating on a 2 and 20 fee structure (2% of assets under management and 20% of profits). The low fees and attractive long term returns of the stock market attract many investors to index funds. They are also viewed as set and forget investment vehicles, that do not require monitoring the quality of a fund manager.

One problem Burry identified with index funds is they almost completely ignore small companies, since most of them concentrate exclusively on large ones. One practical reason is liquidity – it is much harder to adjust holdings for small companies that are thinly traded. This could result in the index fund not being able to track the index effectively, tarnishing the reputation of the passive funds manager. It is for this reason that passive small caps products are nowhere near as common as passive large cap ETFs.

Small caps have returned over six times as much as large caps over a time horizon of several decades (Source: Livewire)

This can however be a disadvantage for investors in ETFs, since small companies generally outperform larger counterparts over long time horizons. Michael Burry is trading his view by finding attractively valued small cap companies, which have been missed by investors sweating over the fees charged by active fund managers. One factor that could increase small cap outperformance going forward is the average company now stays in the S&P500 for less than 15 years, as compared with 60 years a few decades ago. This means that index funds are going to be tracking the performance of more and more companies that are headed for the dustbin, rather than profiting from the continual outperformance of previously untouchable blue-chip stocks.

While we have not yet seen this effect in US markets, which are currently hitting all time highs, we have seen this in the Australian market which recently recorded its first period of 10 years in which the index finished lower. The US market had a similar such period for almost three decades after the stock market crash of 1929. That’s the better part of an entire career, and it’s certainly a long time to not be making any money. There is no guarantee that history will not repeat itself, especially given how high large cap equity valuations are by conventional metrics.

Why Investors are Buying Passive Funds

Despite their drawbacks, investors are still attracted to passive investment funds. One reason is the efficient market hypothesis, which argues that if there was an opportunity to beat the index someone else would have already taken advantage of it. While the investment records of Warren Buffett, Peter Lynch, George Soros, Stanley Druckenmiller and Ray Dalio clearly prove that outperformance is possible, some investors use the efficient markets hypothesis to reject everything other than passive investment opportunities.

More open-minded ETF investors recognise that large companies typically outperform but contend that is too difficult for them to guarantee it. Only 26% of active fund managers outperformed the market in 2016, a figure which rose to 43% the following year. Against this backdrop, some ETF investors believe that at least a portion of their wealth should be invested in index funds since it is difficult, but not impossible, to outperform the market.

While this is a more reasonable proposition than the first one, most arguments in favour of ETFs conveniently ignore the diverse mandates of fund managers. A number of managers will not aim to outperform their benchmarks in bull market, instead investing defensively and outperforming in downturns. The advantage of such an approach is the ability to buy assets at the bottom of an economic cycle. Comparing the past ten years of investment fund returns to the index excludes other similarly long periods where markets were more volatile and active strategies outperformed.

Another reason why investors choose ETF’s is diversification. Relative to a portfolio of eight stocks for instance, an ETF investor will argue that their investment is safer because they could hold a basket of hundreds of companies in a single trade.

This thinking can however be risky. An ASX200 ETF, for instance, will expose more than half your investment to the highly cyclical banking and mining industries. While the investor in the eight-stock portfolio will likely think very carefully about each position and be fully across the risks of their holdings, ETFs encourage carelessness with risk management, since portfolio construction is pre-determined by the composition of the market.

Investors also choose index funds because of tax benefits. Index funds do not buy and sell shares very often, which means that there are fewer capital gains events than most other investment strategies. This is attractive to investors in high income tax brackets, since index funds allow for money to compound more before tax comes in.

Thematic and International Investing as an Alternative to Index Funds

Being able to access the other 98% of global markets opens entire industries and thematic factors that simply are not for sale on the ASX. One example is 5G Networks, a technology enabling the introduction of autonomous cars and IoT devices. This tech is set to transform the global economy over the next decade. We just don’t have companies at the cutting edge of developing 5G in Australia. Telstra faces more competition with 5G than it did with 4G, which doesn’t bode well for the telco giant, given the completion of its 4G rollout was followed by a multi-year share price slide. If you just invested in an ASX 200 ETF however, you would only get exposure to Telstra. Think about whether you are sure this is the right decision for your future wealth.

Contrary to popular opinion however, there are certain factors which help a company outperform over time. Small caps outperform the market, as discussed earlier in the report, and quality businesses also do better over the long run. Between 1988 and 2015, the top quintile of companies by quality also outperformed the market by an average of 4%p.a. While this may seem small, this difference made investors 2.88x more money over the period. 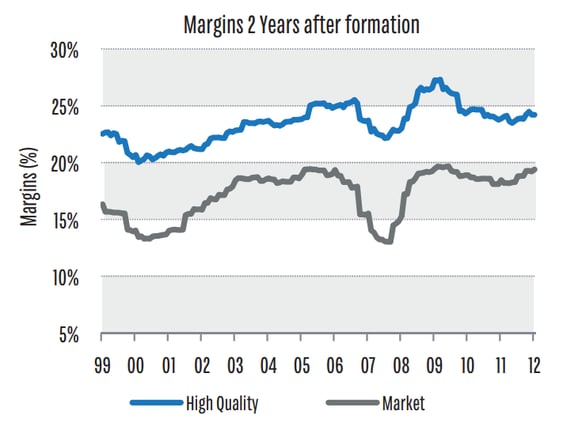 High quality companies generally have the ability to high margins for a sustained period of time (Credit: Schroders)

Quality companies typically employ low levels of debt, and not reliant on a strong economy to do well. One example of this is LVMH, which stockpiled inventory of Moet in the GFC instead of discounting the product, after which is successfully sold all its inventory in the subsequent economic recovery. The company’s ability to do that was due to strong management and a healthy financial position, key hallmarks of a quality company. Those stocks may appear “expensive” with high PEG ratios, but this is justified by the ability of management to grow the business sustainably with low levels of risk.

The S&P 500 has quadrupled since the financial crisis, where our own market has barely doubled. This makes a massive difference to the long term returns of investors and occurred while the Australian economy was enjoying a golden 30 years of economic growth. To make matters worse, most Aussie investors invested in BHP, RIO and the big 4 banks. Most of these investors barely moved over the past 10 years, where someone who bet $350k on the US market and did nothing else would have been sitting on over a million dollars in profits. The market has changed, and the wealth building multi-baggers of the future may not be the blue-chip stocks of today.

There are also opportunities to purchase stocks at far more attractive valuations; high dividend stocks internationally often yield over 10% with growing earnings. This is particularly true in Europe, where a decade of stagnation and concerns over EU stability has dented stock market performance. The WAAAX stocks provide Aussie investors with sky high rates of growth, but trade at some of the highest multiples awarded to any growth companies in the world. This is because there are so few growth companies in Australia, that Aussie investors who are unable to invest offshore must pay much higher multiples for growth.

Typical issues which Aussie investors have with investing offshore include a more limited knowledge of companies outside, sky high brokerage costs at the major brokers and not knowing where to start. We side-step these issues through developing a platform called Macrovue, where a top performing fund manager identifies attractive international investment opportunities for us to look at. We pay $15 a trade for brokerage and have a clear direction on which economic trends we are investing in. As one of the only platforms offering managed portfolios without a management fee, it’s worth looking at a couple of the themes we are looking at. The portfolios each have several stocks that investors can pick and choose if they wish: