How WAAAX Stocks Have Been Tracking Post Reporting Season

WAAAX Stocks had mixed results this reporting season, with not all companies beating earnings estimates. Nevertheless, what surprised a number of analysts is stocks like Altium which missed consensus estimates on a number of key measures for the business but still rallied after the announcement.

WAAAX stocks are a high-flying group of leading ASX growth companies, WiseTech (ASX: WTC), Altium (ASX: ALU), Appen (ASX: APX), Afterpay (ASX: APT) and Xero (ASX: XRO), that have reignited a low growth domestic market and attracted large amounts of institutional capital. The group has continued to rally despite some companies within the group recently downgrading earnings or revenue expectations, highlighting broad based positive market sentiment to the stocks. Nevertheless, since the stocks have such high betas, we would expect them to sell off further in a significant market correction. They have been hit recently because of a rotation from growth to value stocks, but their business models remain intact.

One view on the WAAAX stocks is that the premium to global peers is unjustified, and a result of funds with ASX 200 mandates paying up for growth in a value oriented domestic market. Others believe that non-quantitative factors such as quality management, strong pricing power, and competitive moats justify the earnings premium to international peers. The latter group would also argue that the limited number of growth stocks on the local index presents a restrictive sample size that makes a comparison with global peers unwise.

The alternative view of the WAAAX stocks is that the market is hitting euphoric levels on the back of sky-high optimism towards the tech sector, in addition to optimistic speculators who are happy to pay for several years of earnings growth upfront. They would argue that the sector is ripe for a correction, given that the average forward PE ratio has more than tripled over the past two years alone, to reach a level around 100. These investors point to countless other examples like the Dot com bubble and the Nifty Fifty, which ended in tears for investors.

What both groups of investors would agree on however, is that WAAAX stocks are far more volatile than the broader market. Last December, when the broader market was down almost 20%, most stocks in the WAAAX group were down around 50%. Investors who buy the businesses with a shorter-term horizon would do well to analyse those businesses in the context of the economy and stock market.

One reason for the volatility of WAAAX stocks is the inclusion of barely profitable/ pre-earnings businesses such as Afterpay. Some analysts believe that Afterpay’s concentration amongst creditors with poor borrowing track records make the company like typical sub-prime credit providers. Sub-prime credit performed particularly poorly in the GFC, and many investors do not believe that Afterpay’s investments in AI and unique credit analytics processes will be able to save the company from the same fate. Others disagree however and believe that Afterpay’s low default rate and small loan sizes will reduce non-compliance, given that borrowers would not want to trade a good credit rating for a few hundred dollars.

Zero and Altium both outperformed the WAAAX group on Monday’s trading session, reflecting their more reasonable multiples and strong cash flows. They are also viewed by the market as quality businesses, which generally helps protect companies from selloffs. We saw that in the GFC with CSL, a high multiple ASX pharmaceutical business that corrected 25% against a steep market selloff where the ASX 200 more than halved. 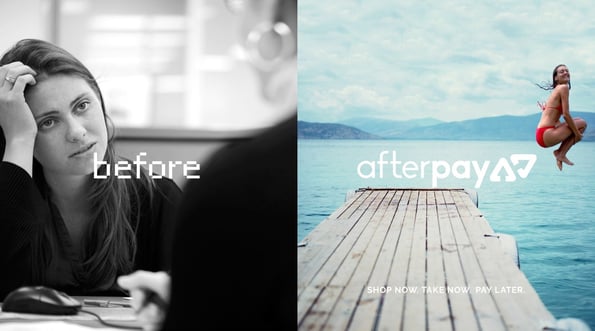 Afterpay has rallied on the back of an extremely successful international expansion strategy (Credit: APT)

Afterpay has been by far the most successful company at executing its strategy in Australia’s rapidly expanding buy now, pay later space. The company had strong annual results this year, achieving sales growth of 140% across their business. This result was marginally ahead of Zip Co’s (ASX: Z1P) 108% revenue growth, further increasing their dominance within the industry. Nevertheless, since Afterpay is already worth significantly more than competitors, this is not a reason to choose the company as your buy now, pay later investment since their successful execution is already in the price.

Since the market has been rapidly following their US expansion strategy, it is worth noting that their US business grew revenue by 6447%. This figure is not quite as great as it may seem however, since the business was not operational in the United States for all of FY18. Nevertheless, recording almost a billion dollars of sales so soon is still a noteworthy achievement. Their maiden result included $5.6m of sales in the UK, a figure that was held down by the fact that they only recently entered the UK market through their acquisition of ClearPay. The company has also signed a high-profile partnership with Visa, which will help them achieve the growth that they are targeting in the market.

One concern of Afterpay bears is the company’s difficulty in monetising their product offering. They have achieved a high level of penetration in the Australian market but are still yet to turn a profit, despite being valued at $7.71bn. While this keeps many investors away, it is important to recognise that at 90% yoy growth, their ANZ business is nowhere near maturity despite being the oldest part of their offering. The other main concern is the level of bad debts in the business. While their level of bad debts is low and fell significantly on the result due to a growing base of customers with a strong repayment history, bears worry this could rise sharply in a recession. This factor explains a large proportion of volatility in the company’s share price, but it remains to be seen whether that volatility is justified.

Wisetech (ASX: WTC) also had a strong showing after reporting season, where they reported strong earnings. The company recorded revenue of $348.3m in FY19 (up 57%) with net profits of $54.1m, growing 33% from FY18. Revenue growth was primarily driven by organic growth across the business but is supported by a successful acquisition strategy over the long term. Nevertheless, the company will have to keep its growth numbers up for over ten years, just to be on a similar price earnings multiple as the rest of the index. Less than 2% of companies can accomplish a similar feat, so the market certainly has high hopes for Wisetech.

WiseTech is a SAAS business operating across the logistics space. The signature solution it provides to the market is CargoWise platform, which helps firms increase productivity. These productivity gains are realised through a comprehensive suite of logistics management solutions embedded in the platform, that enable automation and more efficient supply chain management. Data can be entered once and is accessible across a client’s global database, increasing accountability and reducing errors. This increases viability and simplifies the supply chain, thus making it far easier to manage. Capitalising on enterprise customers gives them a market with high buying power, which WiseTech later could potentially translate into higher revenue per user.

This puts the company on a PEG ratio of 4.93, making it look one of the most expensive WAAAX companies on the index. A PEG ratio is the ratio of a PE multiple to earnings growth, with a number of one typically being used to demarcate expensive growth companies from cheap ones. A PEG of 4.93 implies that investors are expecting WiseTech to continue slowly dominating the market it is in around the world and establish a huge competitive moat. The company’s strong management team may well make this a reality, but either way it is important for investors to be aware of what the market is pricing in.