Adriatic Metals PLC (ASX: ADT) is an ASX-listed precious and base metals explorer and is developing the Vareš Project (100% interest) located in Bosnia & Herzegovina. The project comprises a historic open cut mine at Veovača and brownfield exploration at Rupice, an advanced proximal deposit which exhibits exceptionally high grades of base and precious metals. Adriatic Metals was listed on the ASX in May 2018 and has a market capitalisation of around $A290 million. 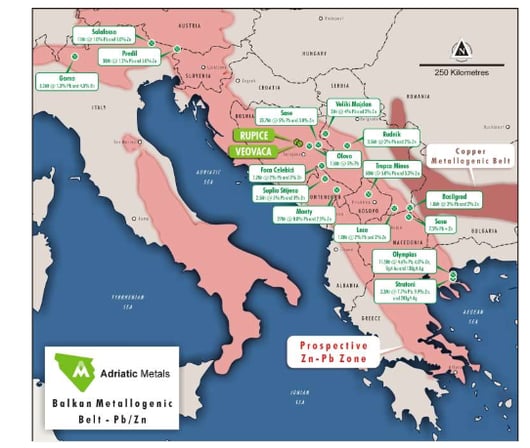 What is Adriatic Metals project?

The Exploration Concession covers two main advanced polymetallic projects located near the town of Vareš, which is approximately 50km north by sealed road from Sarajevo, the capital city of Bosnia & Herzegovina. Both the Veovaca and Rupice Projects have had varying degrees of historical exploration and exploitation, and several prospects within the existing Exploration Concession and in the nearby region also indicate encouraging signs warranting further exploration.

Adriatic Metals released a scoping study assessing the potential viability of running an underground mining operation at Rupice followed by an open pit operation at Veovaca, with all mined material being centrally processed on the site of the derelict processing plant at Veovaca, which will be cleared for construction of a new processing plant. The project produces gold, silver, zinc, lead, copper and barite.

This results of this scoping study were released on 19 November 2019. The key findings are as follows:

What did Adriatic Metals announce on 5 December 2019?

The latest drill results in the southern extensions of the Rupice deposit clearly demonstrate that the high-grade mineralisation continues outside our current Mineral Resource and south towards our Jurasevac-Brestic prospect a further 500m to the southeast. This is our deepest high-grade intercept to date at Rupice and given its location to the east of the current mineralisation, opens the deposit to re-interpretation of the structural controls that have led to the thickest and highest grade results on the eastern down dip extent.

This is a positive for the project discussed above.

What was the market’s reaction to these announcements?